My heart is not easy to break, so I’ll list a few songs that I think was actually heartbreaking.

Stranger In Moscow by Michael Jackson

The raw pain, the sadness, the hurt, the loneliness, no other artist had been able to capture such emotions in a bottle, shake it up and pour it out in a song like Michael.

Fun Fact: This is my favorite MJ song and I consider it his greatest masterpiece.

Nothing Compares 2 U by Sinéad O’Connor

This song was written and recorded by Prince in 1984 and never released… until April this year. It was written during the time when he broke up with his girlfriend and lost his mother to cancer. O’Connor does a fantastic job with it but had Michael Jackson sang it, it would’ve been raining buckets of tears!

Show Me the Meaning of Being Lonely by Backstreet Boys

This sad, but beautifully composed song touched on some of the boys’ real-life issues at the time: Brian’s open heart surgery for a defect he has had since childbirth, Kevin’s deceased father (he provided some actual footage so I know that this song must be quite personal for him), Howie’s sister who died a year earlier of Lupus and Denniz Pop who died in 1998 and produced some tracks for BSB.

Fun Sad Fact: This is my favorite BSB song.

I Will Wait by Nick Carter

Gaa! I did not sign up for this feel trip! I forgot how sad this video actually is with that adorable elderly couple and the acoustic guitar does not help! 😭 Anyway, I love this song because it brings back warm memories of my grandfather because it has that waltzy thing from his era. 💙

I’m not a band lover. I loved Backstreet Boys and I think they’re still together and Depeche Mode is definitely still going strong. I’ll have to go with Creed. Scott Stapp’s voice was not top notch in my opinion, but I liked it anyway. My all-time favorite song of theirs was “With Arms Wide Open”. Taking the lyrics at face value, it’s obvious that it’s about a father (Stapp) welcoming his newborn (Jagger) into the world. But the video tells a different story altogether.

Given that Creed was a “Christian” band, there had to be a spiritual theme.

Stapp is addressing his Creator, there’s lightning and then he is suddenly surrounded by fire and brimstone (?) a sure sign that we’re living in a wicked world; the world in which his son is going to be born in. He sees a tower/church and seek refuge (Proverbs 18:10). He then finds himself in a cave under the tower church and while he sings about his one desire being that his son does not end up like him, he accepts God as His true Savior and is baptized and ends up on top of a mountain with arms wide open as if surrendering to God. Thus God receives His son once more with His arms wide open (The Prodigal Son). 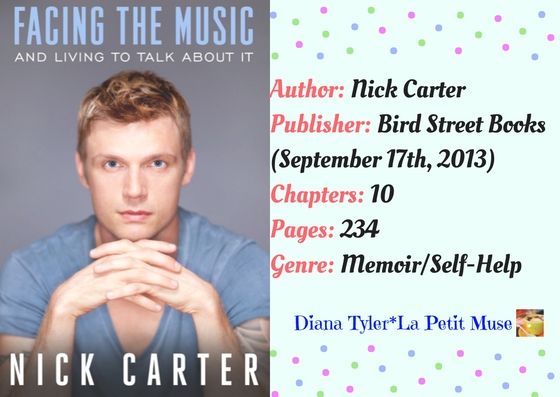 Nick Carter was only 12 years old when he rose to international fame as a member of the best-selling boy band Backstreet Boys. While he was living the dream of young musicians everywhere in studio and on stage, there was much about his life behind the scenes that soon became a nightmare of his own making. Raised in an atmosphere of fear and neglect, Nick carried his childhood chaos with him into his career, self-sabotaging through the abuse of alcohol and drugs to the point where he – and his heart – nearly imploded. When Carter’s long road back to mental, physical and spiritual health was interrupted by the drug-overdose death of his sister, Leslie, he vowed to share all that he has learned about overcoming life’s challenges – particularly self-defeating behaviors – with others. What results is a rare memoir that combines deeply personal recollections with constructive advice to help you replace your most damaging, self-defeating behaviors with new habits to reclaim and enrich your life.

“Your environment can shape you. If you don’t decide what you want to do with your life and go after it, you’ll end up just taking what life give you.”

It’s been a while since I wrote a book review so I’m excited to start back. My goal is to write at least 200 reviews for the blog and we’re at only 89.

We have here a memoir/self-help book by Nick Carter. Writing his name just takes me down memory lane for the Backstreet Boys used to be my favorite band and the piercing blue-eyed blond was my favorite. My favorite songs were “Quit Playing Games With My Heart” and “Show Me the Meaning of Being Lonely”.

Anyway, I’m here about Nick’s book. As I mentioned, it’s not a tell-all memoir. Rather, it is a self-help book and I get the sense that Nick wants to help people who’ve threaded familiar paths, but it appeared a little repetitive. However, it is one of the best rare memoirs I’ve read given that I don’t care for celebrities’ stories. The book is packed with statistics on binge drinking and smoking, two nasty habits Nick worked hard to get over.

Nick grew up in a dysfunctional family, something he was always vocal about and being in the spotlight made him a target for spiral downfalls. Although he is trying to be a better man as each day passes by, there is still the nagging thought that he might relapse. It’s a repetitive thing we’ve seen over the years with celebrities; they say they’re on the mend and 3-5 years later, they’re falling off the wagon and reverting back to their old ways. That’s when they realize that they’re not strong enough.

Over the years, Nick has matured, and he is now married and he is also a dad. I must say that fatherhood looks good on him. His goal is to motivate readers and although I am not motivated, I really enjoyed this book. Nick bares everything from his past to his readers as if he was talking to a personal friend. He was brutally honest and it felt like I was attending a therapy session. Nick encourages readers to keep fit, eat healthily, and to work on their goals. He also got spiritual for a moment when he talked about thinking good thoughts so you won’t be tempted by the devil (it takes more than this, but cleaning out your mind and replacing the negative with cleanliness is a good start). So, the real take away from this mem-self-help, is that everyone struggles with something, but we can overcome them with the right mindset. I have no idea what Mr. Carter is up to lately, but once he’s still a part of the industry, peace may not be permanent in his world.

The entire book is almost quotable and since I’m a quote collector, I’ll share a few of my faves:

^ We all want to help others who are struggling in their lives, especially if they are our loved ones, but as these universal survival methods prove, you have to save yourself first. Being a martyr or a victim does no one any good. You need to be strong, stable, and secure before you can see anyone else to safety. (Page 24)

^ There is shame only in wasting your life by not making the most of your talents and your gifts and the precious time you’re given. (Page 24)

^ You can’t go back and make things better either. And you certainly can’t fix everyone in your life. But you can fix yourself and that should be your focus. (Page 47) This was my message for Postive Monday this week! 😃

^ Remember you have the power to choose a positive attitude even negative things happen to you. (Page 79)

^ There are two wrong ways to handle mistakes. One is to pay no attention to them at all and just keep making them. The other is to get angry and depressed but not learn from them or make corrections. (Page 82)

^ Like so many other child celebrities, I stayed young in all the wrong ways for too many years and had a lot of growing up to do. (Page 225)

I love how stripped down the cover is! 5/5 for me.

While writing this book I took a break to get together with some old friends and a few million other people. That’s when I found myself standing on a stage in New York City’s famed Central Park kicking off the Labor Day weekend. I was performing in public for the first time in many years with all of the original members of Backstreet Boys. This was the launch of our 20th-anniversary reunion tour and it was being broadcast around the world as part of the television show Good Morning America.

Challenge: a song that reminds you of someone

Whenever I hear ‘Quit Playing Games (With My Heart)’ by the Backstreet Boys, I am transferred back to Junior Secondary. Back to that time when I liked Nick Carter and one of my good male friends was slightly jealous of Nick. He eventually discovered ‘QPGWMH’ and decided that it was going to be his song. Well, our song because he used to sing the chorus repeatedly to me. After school, we went our separate ways, but a few years ago I was listening to my favorite radio station when a request came over from someone of his first name to someone of my first name. I shrugged it off thinking that it must be a coincidence although I don’t know how many people of the same first name would call to request that specific song to someone with my first name. 😛

Wherever he is, whatever he is doing, I hope all is well with him.