God never forgets us, but yet, we tend to forget all about Him until that minute of need arises and we remember Him. Never start your day without God. The first thing you must do when you first open your eyes on mornings is to thank Him and engage in prayer with Him, for He must be the first Person we communicate with each day.

41:1-7 > Two years after the chief butler is taken out of prison, the Pharaoh has two disturbing dreams startling him out of sleep both times. The river, he is standing by in the dream is the Nile. The Egyptians’ life revolved around this river and they worshipped it (of course!). Cows (kine) were also worshipped, so it’s no wonder the Pharaoh dreamt of cows. As for ‘corn’, the term is a generic term for any grain and the Egyptians used the cows to trample the ‘ears’ of the grain which would’ve looked something like this barley here:

The Nile is the longest river in the world and it flows through 11 countries. Without this river, Egyptian civilization wouldn’t have existed due to the arid climate.

41:8 > The next morning, Pharaoh sends for all the impressive magicians and wise men, but they, too, were astounded and couldn’t interpret Pharaoh’s dreams. Oh, the sorcery of those so-called dream experts! They’ve just set the stage for Joseph to enter into Egyptian history.

41:9-13 > The chief butler suddenly remembers Joseph and relates his dream account and experience to Pharoah.

41:14 > The timing of God is perfect. A few years passed, and Joseph must’ve been feeling neglected, for he was an innocent man imprisoned in a strange land. See, during the times that we may feel isolated from God or we’re continuously praying and seeing no results, these are the times God is working in/through us to develop our character, to transforming it into that of the image of Jesus Christ. During the time Joseph was in prison, God was doing just that for him and that’s why when it was time for Joseph to get out of prison, it was done quickly, for it was done in God’s timing (also see Psalm 81:5-7).

When we look back at a younger Joseph, he shared his dreams with his brothers in a self-glorifying way and standing before Pharaoh in the following chapters, we see how humbled he has become, and even wiser.

41:15-16 > Now, 30 years of age, Joseph stands before Pharaoh. He is given an opportunity to glorify himself, but he’ll have none of it, instead choosing to glorify God. A sharp contrast to the so-call Christian actors and singers we have lately who, when given the opportunity, shine the light on ‘self’.

41:17-24 > Pharaoh tells Joseph his dream and we’re given additional details. In 41:4, we see the ill-favored and lean-fleshed cows eat up the fat and healthy cows and in 41:21, we see that despite eating the fat cows, the skinny cows remained the same instead of becoming fat.

41:25-32 > Joseph interprets the dreams telling the Pharaoh that the dreams are one and was repeated twice (in one night) for God was going to bring it to pass (v. 32). He reveals that the dream is a warning of severe famine, after seven years of good harvests.

41:37-38 > Pharaoh approves the proposed advice and his servants were also in agreement. The Egyptians might not have understood the “Spirit of God” (the first mention of the Holy Spirit coming upon a man in the Bible) fully, but they knew that God had assisted Joseph.

41:39-44 > Joseph is promoted to a position of great authority. He is now the number two man in Egypt; the Vizier (Prime Minister) to the Pharaoh.

41:45 > “And Pharaoh called Joseph’s name Zaphnath-paaneah” Various proposals have been given for the meaning of Joseph’s Egyptian name, the top two being “The Salvation of the World” and “God Speaks and He Lives”. Joseph is also given Asenath as wife; she was the daughter of the priest of On.

The Egyptians were sun worshippers and in Joseph’s time, the centre of sun worship in Lower Egypt was the temple of Atum (see notes below about this deity) at On (later called Heliopolis by the Greeks). Two obelisks were originally erected at On by Pharaoh Tuthmosis III (c.1504 – 1450BC); they were called Cleopatra’s Needle and had nothing to do with Cleopatra. Today, those obelisks can be seen in Central Park, New York and on the Embankment in London.

41:46-49 > The seven years of plenty came to pass. It’s important to note, that, like Jesus, Joseph begins the Lord’s work at 30 years old, both on orders from God.

41:50-52 > Sons are born to Joseph, before the first year of the famine. The firstborn, he called Manasseh meaning “One Who Causes Me to Forget” for God made Joseph forget all his previous pain and trial. Ephraim means “Fruitful” for God made him fruitful in Egypt. His sons were given Hebrew names for although Joseph forgot his pain, he did not forget the faith of his fathers.

41:53-56 > The 7 years of the famine begins and it not only affected Egypt, but also in surrounding countries such as Arabia, Syria, Palestine, etc.

41:57 > All the neighboring nations came to Egypt to buy corn.

Fun Fact: Egypt was once known as the breadbasket of the world because of the Nile.

Up next: Joseph’s family comes to Egypt and his dreams of teenage years come to pass.

^ Atum or Atem or Tem was also known as the great he-she was a creator god. He was the first and most important god to be worshipped in Iunu (Heliopolis, Lower Egypt) for the ancient Egyptians believed that Atum (the setting sun) rose from the waters of chaos (Nun) and created all the gods. Later, Ra (the rising sun) would become the main god. 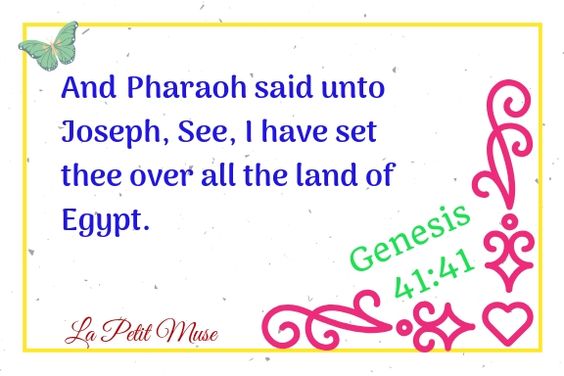