But I say unto you, Love your enemies, bless them that curse you, do good to them that hate you, and pray for them which despitefully use you, and persecute you;

When I was a teenager, I used to say that I have no enemies, not knowing that they came in the form of a friend, a co-worker, a neighbor, or even a family member. And that one enemy can use your very own friends and family to turn against you. The world is also an enemy.

Praying for our enemies is a form of love. When we pray for those who spite us, we follow the Saviour’s example as He hung on the cross. He could’ve asked the Father to persecute His enemies as they did Him, but instead, He chose to ask the Father to forgive them (Luke 23:24). Even when Stephen was being stoned to death, he followed in the footsteps of Jesus and expressed love for his enemies by asking God to forgive them (Acts 7:60).

I know it can be hard to pray and sometimes to forgive our enemies, but think about this: do you want to end up just like them? When we act spiteful, we allow hatred to fill our thoughts which in turn quench the Holy Spirit in our hearts and feelings gets in the way, and you may be tempted to spite, act out or even kill your enemy. But when we pray for our enemies, it eradicates anger and in some casts fear for perfect love casts out fear (1 John 4:18).

Before you pray for your enemies, release all negative thoughts including revenge and hateful emotions. Seek wisdom to pray and to love your enemies as Jesus did. 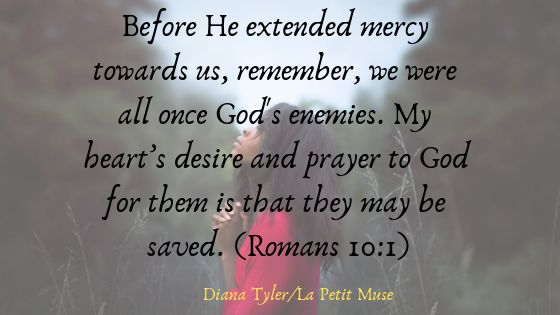 29 thoughts on “Devotional Nugget #2: Have you prayed for your enemies lately?💙”