Jesus can never tire of carrying our burdens! He is there for us always and waiting for us to heed His call to come to Him, O wear traveler, for, in Him, you’ll find that precious rest you’ve been desperately seeking. Seek Him while He is near today.

This is a long chapter and perhaps, the longest thus far (I can be wrong) at 67 verses. It deals with Abraham sending a servant to seek a bride for his son and the result of this faithful outcome.

Abraham was over 100 years old and blessed with both temporal and spiritual things (24:1). The name of the eldest servant is not mentioned in 24:2, but in 15:2, the name of the eldest servant was Eliezer. However, this particular servant didn’t have to be Eliezer. Abraham does not want Isaac to be married to a Canaanite woman so he made the servant take the oath to go to his (Abraham’s) country (Mesopotamia 24:10) to his kindred (Abraham’s brother Nahor) to get Isaac a wife (24:3-4). Before the servant takes the oath, he cautiously enquires what would or would not oblige him (24:5). Abraham clears up the matter; Isaac was never to leave the Promised Land (24:6). Abraham was confident that God Himself had already chosen a wife for Isaac for God had spoken with him concerning the matter (24:7). The servant was perhaps still uneasy, so Abraham tells him that he would not hold him by the oath if things didn’t go according to plan (24:8).

The servant then placed his hand under his master’s thigh and swore as Abraham had asked of him (24:9).

The servant sets out on his mission with presents for the bride. The 10 camels he took would also serve as a means of transport for the bride and her companions for the return journey (24:10). The camels are given rest by a well without the city of Nahor at evening time when women would come to the well to draw water (24:11). The servant prayed to God for a sign concerning the chosen woman for Isaac (24:12-14).

Before the servant was even done praying, God answered his prayer in the form of Rebekah (24:15).

I could imagine the look of surprise on the servant’s face when he realized what God had done! His prayer had been answered, but he still needed confirmation. Rebekah was beautiful, young, a virgin, and Isaac’s second cousin (24:16). The servant ran to meet her and asked to taste a little of the water. He was not looking to quench his thirst, but to test her (24:17). She gave him a drink and proposed to also draw water for the camels (24:18-19). She then drew water for all 10 camels (24:20). Let that sink in: TEN CAMELS! One camel can hold up to 25 gallons of water. Rebekah did not only talk about watering the camels, she actually did it proving that she had the heart of a servant.

Rebekah did everything the servant prayed to God about, but, yet, he had doubts reflecting on if God made his journey prosperous or not (24:21). After the camels quenched their thirst, the servant gave the maiden a few gifts (24:22). He then poses two questions in 24:23: “Whose daughter art thou?” and “Is there room in thy father’s house for us to lodge in?” He was still in doubt and wanted to make sure that the maiden was related to Abraham and the status of her family’s wealth.

Rebekah runs ahead to her mother’s house (tent or apartment) to relate the events that passed while she was at the well (24:28). Her brother Laban rushes to meet the man at the well (24:29) after hearing his sister’s words and seeing the jewelry upon her (24:30). Laban had probably come to the conclusion that the stranger at the well his sister met was wealthy and wanted to see for himself. Laban calls the servant blessed and invites him into the house (24:31). The servant accepts the invitation (24:32). After taking care of the camels and the washing of feet, meat was set before the servant, but he refuses to eat until he states the first order of business (24:33).

The servant tells his story and the nature of the trip (24:34-48). After relating the entire story, he now waits for an answer (24:49). “Then Laban and Bethuel answered and said” (24:50). The word “answered” is used in the singular form. However, given that Bethuel was probably old in age, he would’ve left the management of the household to his son Laban (as it was customary) who gave the answer in the name of Bethuel. The family agreed to let Rebekah go with the servant to be Isaac’s bride for it was God’s will (24:51). At their consent, the servant humbly bows down and thank God (24:52). He then presents the family with lavish gifts (24:53). These gifts were known as dowry and it was the custom back then for the father of the groom to give valuable things to the family of the bride. By this dowry, Rebekah was betrothed/engaged to Isaac.

Mission accomplished, they celebrate the occasion, but the servant refuses to tarry (24:54). The family wanted to spend a few more days with Rebekah, but the servant didn’t want to be detained any longer for he was anxious to go home to his master with the good news (24:55-56). The family decides to let Rebekah choose to tarry a little longer or to leave immediately (24:57). Rebekah did not hesitate, she simply answers “I will go” (24:58). She has never seen her future husband, but she’ll go with faith and willingness. This was God’s will after all.

Rebekah and her nurse go with Abraham’s servants (24:59), but before they fully depart, her family blesses her with a beautiful prayer (24:60). “be thou the mother of thousands of millions” ties in perfectly with God’s promises of MANY descendants to Abraham through Sarah and Isaac. 1000’s of millions (Christians) are descendants through Abraham. Rebekah took some of her servant girls with her and they followed the servant (24:61). I could imagine Rebekah wanting to know all about Isaac and asking the servant about him to which the servant happily obliged during the return trip.

Isaac was coming from the well Lahai-roi (24:62). We met this well in 16:14 when Hagar was comforted by God. Isaac lived there after the death of his father (25:11). Isaac went out to meditate when he saw the camel caravan returning (24:63). Talk about being in the right place at the right time! Rebekah was looking around, her eyes beheld Isaac coming towards them and she respectfully got off the camel for it would have been disrespectful to Isaac had she continued to sit on top of the animal (24:64).

In her heart, Rebekah already knew who Isaac was, but she wanted confirmation from the servant. This is why she got off the camel and covered her face with a veil (24:65). It was customary for the bride to veil her face in the presence of her betrothed until the wedding day. The veil also signified submission, chastity, and modesty.

The servant relates the detailed story of his faithful journey to Isaac (24:66). Isaac accepts Rebekah as his wife before he even saw her face and when he did eventually saw her beauty? Well, he loved her and he was comforted by her after the death of his mother (24:67).

^ “Laban” means white. So this was a fair-skinned tribe. (bible-studys.org)

^ Where relationships are concerned in the Bible, dating was not really something people do. Couples didn’t go out, hold hands and kiss to see if they were compatible. Parents chose what they deemed a suitable wife or husband for their children. This was called an arranged marriage. 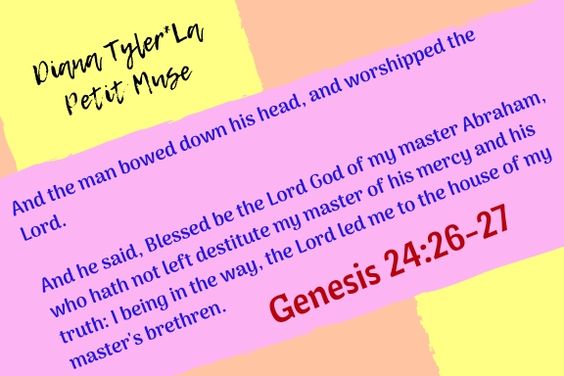