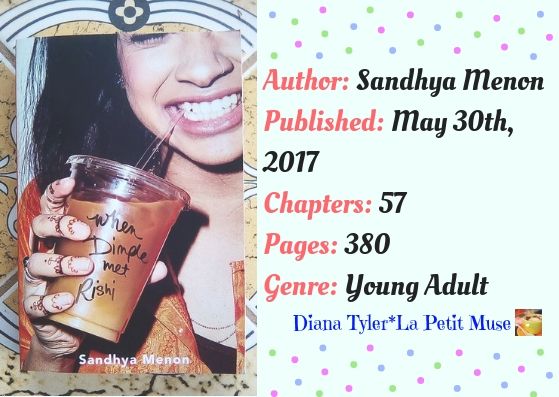 I read this book two months or so ago and I have to say that I am pretty disappointed with one Dimple and the plot. I’ll never stop writing honest reviews for I don’t believe in changing my opinion for anyone. I have so much to say that this might get a little lengthy.

Oohkay, let me warm up first.

I went into this book neutral because YA rarely lives up to the hype no matter how many Book-tubers swear by the book (I’ve unsubscribed to all of their channels for they almost always have the same boring and repetitive content). I came out hating this book. Dimple was just an awful character although I liked her for the first few pages. She was a nerd and she wanted to pursue her dreams, but then she met Rishi, and in the blink of an eye, her entire character changed quicker than a chameleon changes its skin.

She was irritating and annoying that I wanted to reach into the book and slap her silly.

As for Rishi, he comes from money, but he doesn’t act like it. He’s humble and obedient to his parents even when they set him up to attend Insomnia Con (kind of a party name for a tech convention don’t you think!) to court Dimple. As a matter of fact, Dimple and Rishi’s parents tricked their kids into attending the convention (although Dimple really wanted to go) so they can meet.

Rishi draws comics and he’s great at it, but he’s keen on following his parents’ dream of him having a great future in business (I think). I love the fact that Rishi was so comfortable with his uncoolness, he was the coolest person in the room.

Now, let’s rant in notes as I tear the book apart.

^ I did not get a sense of San Francisco besides the fog named Karl. Yes, the fog in San Fran is called Karl and the author did a great job of reminding us. However, I did not feel transported to San Fran as I did when I read James Patterson’s Women’s Murder Club series.

^ I think the author should’ve translated Hindi phrases for non-Hindi readers. I understood some of it for I used to learn Hindi at one point.

^ An obnoxious group of well-manicured people – a white girl and boy, and an Indian boy – were already trying to take pictures of one another. (Page 65) What? You mean to tell me that black people don’t live and study in San Fran?  I thought it was unnecessary to point out the color of people’s skin for it did nothing here. I would’ve gotten it had Rishi never seen white people in his life, but for some reason, it just doesn’t work here.

^ “This is how it works in the US: In the spring we’re constantly subjected to bunnies and eggs wherever we go, signifying Christ’s resurrection. Then right around October we begin to see pine trees and nativity scenes and laughing fat white men everywhere.” (Page 142). Now, this does not offend me in any way for Easter is a pagan festival and Christmas does not signify Christ’s true birth. However, I think this paragraph was meant to be religiously controversial as Rishi said at the end that he gets to explain Hinduism. Author, stop being so foolish. If a Christian were to go to India now, they’ll be assaulted with Hinduism iconography. If the so-call Christian images are assaulting your senses, pack your bags and leave America for good.

^ So Dimple attends a party and drags Goody Two Shoes Rishi along with her. I can’t believe that the author wants me to believe that someone like Dimple who scorns people and social life like the plague attends parties. Just no! It doesn’t work. On the other hand, I can believe that Rishi has never been to a party before besides Diwali ones.

^ Cue unnecessary dramatic exit: He turned and walked away, the fog swallowing him whole. (Page 353).

^ Where is the coding talk? The tech talk? The app talk? The whole point of Dimple attending Insomnia Con was to create a health app to help people and there was hardly any talk of it. This book was pure drivel.

^ I am going to sound stereotypical, but this scene calls for it: Which respectful Indian boy or girl would be making out in a dark alley and when things get heated, the girl asks, “What? You mean here? We can’t do it here?” and “If you’re doing this because of some old-school concern for my ‘honor’, you don’t need to.” (Page 287). Nice going, Dimple. Really nice going. I can think of all the names in the book to call you, but then, that wouldn’t honor you, would it now?

^ Insomnia Con is having a talent contest and Dimple wants to do a Bollywood dance. They started off with ‘Dil Na Diya’, but ended up dancing to ‘Dance Pe Chance’ from Rab Ne Bana Di Jodi.

I was relieved when I came to the last page of this garbage. It would’ve been interesting to know more about the app and Dimple’s competitors’ apps as well. This story went from its focus on creating an app to a pointless talent show. With all of the ‘careful’ preparations leading up to the show, you’ll think the author would dedicate more than just a paragraph to it (Page 308). I wanted Dimple and Rishi to lose the talent show, but of course, they won for they danced to a SRK song after all.

This book was a total mess and you know what else is? Jab Harry Met Sejal and I am contemplating on doing a review soon. The author said that she was inspired by Bollywood movies and she passed for most Bollywood movies are a mess. This writing was cringe to the max.

The author forgot to thank Shah Rukh Khan in the acknowledgments and this book put me off so much that I don’t think From Twinkle, With Love would be redeeming… but I’mma read it anyway. 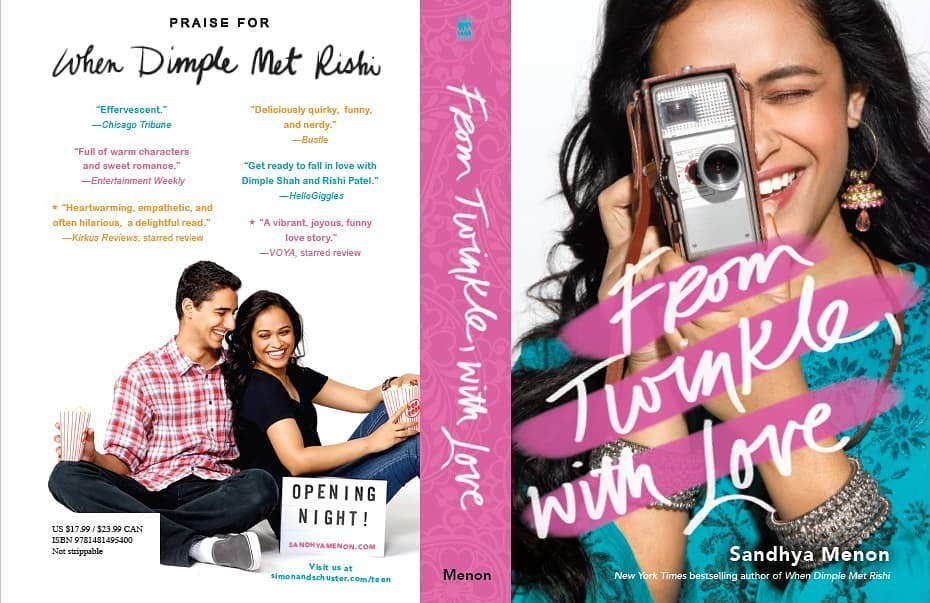 Probably one of the most natural covers I’ve ever seen! I love that the model isn’t airbrushed and you can see all the hairs on her face. 5/5.

*** GIFs and photos used are not mine unless stated otherwise. Credit goes to Google Search.