Happy Sabbath and welcome back to Bible Study. I trust that your week was well spent and blessed. Did you learn anything new during your study of God’s Word? If it’s something that you’ll like to share, feel free to do so in the comment section below. Open up your Bibles to Genesis 15 and let’s get down to some study of our own.

Abram yearns for an heir

And after these things (Gen 14), the word (Christ) of the LORD visits Abram via a vision (15:1) to encourage him and to ease his fears after defeating a HUGE army. He might have feared an attack of retribution, but God promised that not only He is Abram’s shield, but also his reward. In response to God’s encouragement, Abram honestly opens up about being childless and thought of adopting his steward (his right-hand man) Eliezer of Damascus as his male heir (15:2). Although God has promised that he’ll be a father of many, Abram still had doubts for he was without an heir (15:3). God reminds Abram of the promise of the heir that would be his own flesh and blood and illustrates it by referencing the stars in the sky (15:4-5).

And Abram put his trust in God (15:6). This is a fine example showing that we’re justified by faith and not works. Also cross reference Romans 4:19-24 and Galatians 3:5-7.

Abram’s faith did not lean on believing in God but believing God.

God makes a statement reminding puny Abram who He was (15:7). Abram wants to know how he shall inherit the land (15:8). A ceremony soon follows to mark the covenant (15:9-21). God tells Abram what animals to gather (15:9) and most of those animals became a sin sacrifice in later ceremonies. Abram heeds and he knows exactly what to do with the animals (15:10). While Abram waits for God to walk through the animal carcasses to sign the covenant, vultures paid a visit and he quickly chases them off (15:11). The sun was about to set when God put Abram to sleep (15:12) and came to him via a dream giving Abram the rundown of the hardships that would befall his descendants (15:13). This prophecy took place some 300 years later when Israel sojourned in Egypt and served the Pharaoh for 400 years. But God would judge Egypt and bring His people out with great wealth (15:14).

God would give the Amorites a chance to repent before Abram’s descendants make their entrance to the land (15:16). Sadly, the Amorites did not repent. The presence of God represented by a smoking furnace and a burning lamp (God is a consuming fire!) pass through the animal pieces; God passed through by Himself (15:17) thus sealing the covenant He made with Abram (Note that Abram did not walk through the animal pieces for God signed the blood covenant for both of them. Abram cannot break a contract he did not sign and he could’ve held God accountable had He not kept His end of the bargain. He didn’t have to, though, for God can never lie).

God then quotes the specific lands Abram’s descendants will inherit (15:18-21).

Sarai is barren and childless and instead of waiting for God to fulfill His promise, she proposes that Abram her husband of many years have a child through her Egyptian maid Hagar and Abram heeds the voice of his wife (16:1-2). This is a surrogate arrangement so the child would not be considered to be Hager’s but Sarai who lost faith and decided to help God out. Abram could’ve manned up and said no to his wife and poor Hagar gets caught in the middle of their heir scheme. How he’d think Adam messed up in the first place? He didn’t say no to Eve. Let’s go to court:

Defense: It’s been more than ten years since God made the promise regarding Abram’s descendants (16:3). The long wait discouraged them and they grew impatient.

Verdict: Despite the lapse in time, God’s ways are not our ways and He fulfills promises in His timing, not ours. God cannot lie and if He promises you something, you don’t try to help Him no matter how gloomy things start looking. Take comfort in the promise and look ahead to the time when God would eventually bring it to pass. He always keeps His word.

Sarai gives Abram permission to marry Hagar (16:3) and when she conceives, she feels superior to Sarai (16:4). I blame Abram for this for he should’ve reminded his wife of God’s promise. Two women cannot share one man. Marriage was intended for two to become one (2:24). When Sarai saw that she was despised by her maid, she blames Abram and demands justice to right the wrong (16:5). What does Abram do? He gently tells Sarai to deal with Hagar as she sees fit (16:6) for despite both women being his wives, Hagar was still considered lower than Sarai for she was still the help. Besides, Abram didn’t seem like he was too happy with the arrangement he made with Hagar. However, as the man, instead of taking charge of the situation, he cowardly backs away and leaves the decision making to Sarai. She must have dealt harshly with Hagar for she caused the Egyptian to flee.

An Angel appears to Hagar as she attempts to make her way back home to Egypt reaching as far as Shur (16:7). The Angel here is said to be God, in the Person of Jesus given that He spoke in the first person (16:10-12) and Hagar recognized that in seeing this Being, she had seen God and called upon His Name (16:13). This is also the first time that the Angel of the Lord appears in the Old Testament. I’ve included a little note on Angels via bible-studys.org in the recap section below.

The Angel calls Hagar by name and questions her although He already knew her predicament (16:8) and tells her to return to her mistress (16:9). God promises to multiply her descendants through her son (16:10) which He did for Ismael went on to become the father of all Arabic peoples. This also meant that Abram became the father of two groups of descendants: both Arabs and Jews are descended from Abram by two half-brothers: Ishmael and Issac. Had Abram and Sarai not tried to help God things would’ve turned out differently.

Hagar is told to call her son Ishmael meaning “God hears” (16:11). Ishmael’s life wouldn’t be easy while dwelling in the presence of his brethren (16:12). Hagar realized that this Being was indeed God talking to her and calls Him “You Are the God Who Sees” (16:13). Hagar dedicates the well to God calling it Beer-lahai-roi (well of the living One). She goes back and bares Abram a son called Ishmael (16:15) and Abram was 80 (16:16).

^ I love that David was a man after God’s heart, but I’ll rather be Abram for a day so God can call me His friend as He did Abram. His friendship with God was beautiful, but it’s hardly talked about.

^ Some of us may look at Abram’s openness as complaining (15:3-4), but it’s better to be open with God, bearing all that is in our soul.

^ Concerning 15:9-21: In those days, contracts were made by the sacrificial cutting of animals, with the split carcasses of the animals lying on the ground. Then both parties to the covenant would walk through the animal parts together, repeating the terms of the covenant. (blueletterbible.org).

^ Even after all that Abram and Sarai did in trying to help God, it would still be more than 13 years when the promise was eventually fulfilled.

^ Fun Fact: Ishmael is the first man in the Bible to receive his name before he was born.

A closer look at the context of His appearances reveals that He is more than another angel, He is God. The expression usually signifies a pre-incarnate appearance of Christ and is sometimes called a “Christophany,” meaning the visible and bodily manifestation of God the Son before His incarnation.

The Angel of the Lord no longer appears to men today, since God has commissioned Christians to be His messengers to the world. 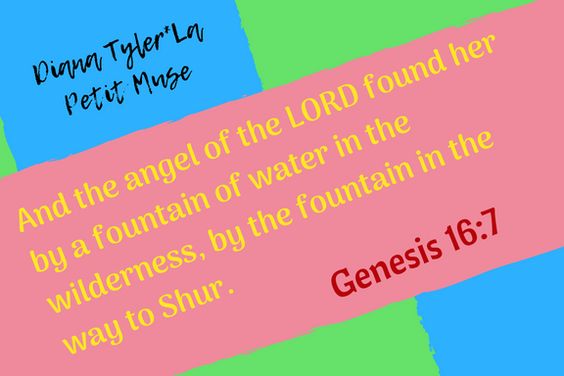 33 thoughts on “Genesis part X: The promise of an heir and Ishmael is born”