I wonder if I’m moving at a snail’s pace with Genesis for I’m only on the 13th chapter, but timing is everything and rushing won’t make sense for then I won’t enjoy studying His Word. I trust that everyone had a great week and welcome back to Bible study.

God renews the promise to Abram

Abram, Sarai, and Lot come out of Egypt and heads “into the south” which is the land of promise (13:1). Abram was also very rich in temporal things (13:2). This great example shows that having wealth is not a sin, but the love of wealth is. Also, thanks to the Pharoah, Abram’s riches was increased. However, Abram heads right back where he started (13:3-4). I took note of two significant things here: (i) There was no need for Abram to go down into Egypt for God would’ve provided his needs during the drought if only he had relied on God and (ii) Abram realized that he had sinned and had to go back to find God, seek forgiveness and begin again. 13:5-7 saw conflict creeping in among Abram and Lot’s herdsmen. In 12:1, God commanded Abram to leave his family behind when he came to Canaan, but Abram bought his nephew along. Lot was a grown man now and he had acquired much wealth as his uncle that the land which they shared couldn’t contain it. It is also important to note that the conflict started when Abram got right with God. Whenever we get right with God, that’s when the devil deals deceitfully with us.

The strife had to be resolved for Abram wanted peace (13:8) and the only logical reasoning was Lot moving and establishing his own dwelling. Abram generously made an offer to Lot (13:9) in which Lot will choose which part of the land he wanted and Abram will be content with to take what Lot did not want. A fine example of selfless love. Abram looked out for the interest of others and not only his own (Philippians 2:4). Also, Abram learned from his past mistake and knew that he could trust God to provide for him. However, Lot’s eyes were set on the material abundance and beautiful lushness of the plain of Jordan (13:10-11) that he did not care how the atmosphere would spiritually affect his family. Instead of asking Abram for help or praying about it, he was led by the sight of his eyes. Later on, we come to see how his decision ruins his family.

Lot pitched his tent toward Sodom (13:12) and he later dwells there becoming a leader of a sinful city (19:1). The inhabitants of Sodom were exceedingly sinful before the Lord (13:13). With Lot gone, God renews the promise to Abram and his descendants concerning the land (13:14-15). He also reminds Abram of the promise to give Abram many descendants (13:16). Abram walks through the land God gave to him (13:17) and eventually came to dwell in Mamre (a large grove of trees owned by Mamre the Amorite as we’ll see in 14:13) and built an altar as he was committed to worshipping the Lord (13:18).

The battle of 4 kings against 5

14:1-10 sees the four kings of the cities in the region of Sodom and Gomorrah rebel against the Confederation of five kings of nations ruling over them (blueletterbible.org). Five cities of the plain revolted and Chedorlaomer (king of Elam) with three allies were against them (14:1). The five kings ruled over a single town and its neighborhood (14:2). Note that the name of the king of Bela which is Zoar was not given. Maybe it was due to the fact that Zoar (little) was insignificant. The royal heads came together in the vale of Siddim (14:3). The five kings served Chedorlaomer for 12 years and they were probably enslaved by him so they made the decision to rebel in the 13th year (14:4). In the 14th year, Chedorlaomer and his allies came to quell the revolt (14:5-6). They passed the country of the Amalekites (En-mishpat, which is Kadesh), but being victorious in their original pursuits, they came back to En-mishpat and slew the Amalekites (14:7).

We now come to the climax of the battle from 14:3: the five kings led by the king of Sodom joined battle with the 4 in Siddim (14:8-9). The kings of Sodom and Gomorrah fled, fell and perished into the slimepits while the other kings fled to the mountain (14:10). The invaders raided Sodom and Gomorrah taking all they could put their grabby hands on (14:11), but it becomes personal for Abram when they took his nephew Lot (14:12). Lot was taken captive for he was also dwelling among the wicked people. However, a survivor escaped and located Abram to tell him the bad that had befallen Lot (14:13). Here, we see the term ‘Hebrew’ being used for the first time. Immediately taking action, Abram puts his on his warrior mode, assembled 318 servants capable of fighting and pursued the kidnappers unto the city of Dan (14:14). Abram leads his army to victory over the 5 kings using his military wisdom (14:15). He brings Lot back and all of his possessions (14:16). Unfortunately, Lot didn’t heed the warning and went back to dwell in Sodom.

The king of Sodom was delighted with Abram defeating his enemies and came to greet him (14:17). Abram meets Melchizedek the priest of the God Most High (14:18). Melchizedek blesses Abram (14:19) and Abram paid tithes (14:20) which would’ve been one-tenth of the spoils (Hebrews 7:4). Abram refuses to take the spoils from the battle so as not to be obligated to the king of Sodom (14:21-24). After all, it was God who won the battle for him.

^ I love the meaning of Mamre (vision) and Hebron (communion). Abram is walking in God’s vision and being in communion with Him.

^ Slimepits were said to be asphalt later on.

^ Melchizedek was a king and a priest of God. He was the king of Salem (the original Jerusalem) and his name means “king of righteousness”. He was a king-priest who typifies the true King-Priest (Jesus Christ) later to come into the world to save sinners. The bread and wine he bought Abram also typify the bread and wine at the Passover.

^ The vale of Siddim and Salt Sea are the same as the Dead Sea. 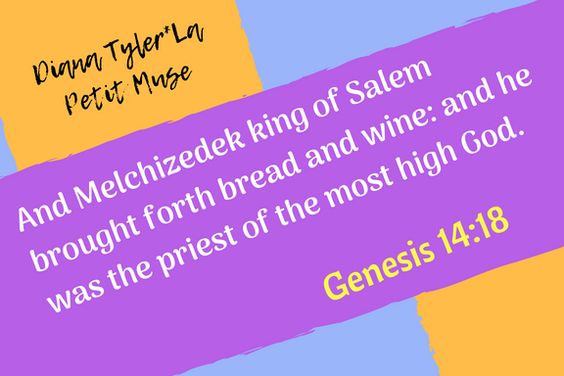 26 thoughts on “Genesis part IX: God renews the promise and a kingly battle”