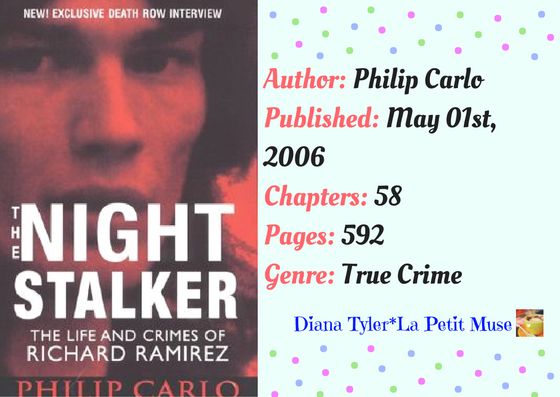 Twenty years after Richard Ramirez left thirteen dead and paralyzed in the city of Los Angeles, his name is still synonymous with fear, torture, and sadistic murder. Philip Carlo’s classic The Night Stalker, based upon three years of meticulous research and extensive interviews with Ramirez, revealed the killer and his horrifying crimes to ve even more chilling than anyone could have imagined. From watching his cousin commit murder at age eleven to his nineteen death sentences to the juror who fell in love with him, the story of Ramirez is a bizarre and spellbinding descent into the very heart of human evil.

Incredibly, since The Night Stalker was first published, thousands of women from all over the world have contacted Carlo, begging to be put in touch with the killer. Carlo interviewed them and, in this compelling tenth-anniversary edition, presents their disturbing stories and the dark sexual desires that would drive them toward a brutal murderer. And in an exclusive interview, the killer himself gives his thoughts on the “Ramirez Groupies” – and what he thinks they really want.

Carlo was born in New York and from an early age, he was involved in gang activity. He was only 15 when he witnessed a friend shot to death by hitmen. He was shot in the forehead at 17 and decided to turn his life around. Carlo became a journalist and he was the bestselling biographer of Richard Ramirez, Richard Kuklinkski, Anthony Casso and Thomas Pitera. He suffered from ALS and died from the disease in 2010 at the age of 61. I could see why he felt a certain ‘bond’ with Richard Ramirez.

The author divided the book into four parts: Book 1 was dedicated to The Night Stalker’s victims, the second book dealt with his childhood in El Paso, the third book was about his capture, and the fourth was about the trial. The author was overly descriptive at times, and also repetitive. At other times I felt as if I was reading a fiction novel about a serial killer. But overall, good storytelling and writing. I also liked that he didn’t jump around the timeline as other true crime writers do.

He makes many serial killers including Charles Manson look like a boy scout. (“To be a good killer you have to plan things out carefully. You’ve got to be prepared in every way when the moment comes to strike; you cannot hesitate.”) This pretty boy Satan-worshipping killer was exposed to the wrong company while growing up in El Paso including his older brothers and a big cousin named Mike who shot and killed his wife in front of Richard. He had a penchant for cocaine and was good at stealing until it escalated into breaking into people’s homes at nights and torturing them. Heavy metal music was his gospel and Satan was his protector. Yet, Satan abandoned him in the end. This coward son of a gun snuck into people’s homes at night – dressed in black from head to toe – and terrorized, raped, sodomized, killed and beat his victims (sometimes to death). He mostly preyed on the invalid in the name of Satan and yet, women found this a major turn-on. I just had to ask:

Had Richard not been good looking, would he as the Night Stalker, have the same effects on these crazy hormone-induced women?

Some citizens of Los Angeles were careless given that the media had warned them about the crazy ruthless killer. Yet, some left their doors and windows open. During his trial (which was a circus if you ask me. There should never have been one in the first place.), the ‘Ramirez groupies’ came out in full force to support him. They were attracted to his face and the fact that he was dangerous. They fought over him and offered their bodies to him. Even juror Cindy Haden fell in love with him during the trial.

He was right about one thing during his interview with Mike Watkiss:

“People in this day and age, are brainwashed and programmed like a computer and being nothing more than puppets.”

Ramirez died on June 7, 2013, due to complications secondary to B-cell lymphoma at 53 years old. He had been on death row for over 23 years.

The downtown area around the Los Angeles Greyhound Bus Terminal is a very dangerous place after dark. Colorful legions of thieves, muggers, fences, crackheads, junkies, alcoholics, and ten-dollar whores prowl like hungry sharks around a bleeding man. Known as skid row, people here often sleep in the filthy, vermin-infested streets where they dropped the night before.

… My last True Crime book for now. Although I still follow court/cold cases and read law books be it fiction or not, I’ve come to the realization that I’m happy I didn’t follow the path to become a Lawyer.

5 thoughts on “Book #115: The Night Stalker: The Life and Crimes of Richard Ramirez”