When I was younger, my favorite duet was ‘Say Say Say’ by Paul McCartney and MJ. Never cared for Paul and still don’t, but Mike loan his beautiful vocals to this track and I loved it.

Say, say, say what you want
But don’t play games with my affection
Take, take, take what you need
But don’t leave me with no direction

All alone, I sit home by the phone
Waiting for you, baby
Through the years
How can you stand to hear
My pleading for you dear?
You know I’m crying ooh ooh ooh ooh

Well, we were waiting for this. Sort of… kind of.

When CBS announced that Criminal Minds was going to be back for the 13th season, I have to be honest: I was not pleased. I did not see how they could’ve come up with interesting concepts after capturing Mr. Scratch and I was right because I found the season boring despite Mattew Gray Gubler turning out to be its saving grace (when is he never?). I rated S13 a 3/5. Had it not been for Spencer, the entire season would’ve been a total disaster.

After the last episode left us with a cliffhanger, CBS was in no hurry to renew the show. Had it ended on a different note, I would’ve agreed, but it was a cliffhanger with Spencer and Penelope’s lives hanging in the balance. How dare Erica Messer do this? How dare she force CBS into renewing the best show ever to grace TV?

But CM did manage to clinch a last-minute S14 renewal over the weekend. However, the exact order size has not been determined and there is speculation that it’s going to be a 13-22 (or 18 for that matter) episode finale. The S14 premiere will mark the BAU’s 300th episode. And I’m still not fluent in another language. Et patati et patata!

Anyways, for S14, I do not want to see the return of Hotch. I haven’t missed him since he left and I won’t miss him now. If he makes a cameo appearance, fine. Prentiss is doing a wonderful job as team leader. Sometimes change is for the better. The upcoming season needs to deal with Rossi aging (possible retirement?) and this:

There is so much tension between Luke and Garcia and that needs to be resolved. I know it’s against the rules for agents to have a relationship, but if the show is coming to an end, why not? They can quit the BAU and get married. Any blind person can see that they like each other. 😆 Wishful thinking isn’t going to get me anywhere.

And Reid needs a girlfriend. With all the teaching and sabbatical he did last season, there better be some sort of budding relationship in there for our resident genius. Over the years, we’ve seen him in an “almost” relationship with a celebrity (“Somebody’s Watching”), two ladies fought for his affection (“Zugzwang”), and one heart was broken, his.

FUNFACT: “Zugzwang” happens to be my all-time favorite episode of CM. It had everything although it was hard not to feel for Reid. MGG emotionally went in!

Can’t the man just have a normal relationship in which he doesn’t have to speak to his girlfriend by phone only for her to die when they finally meet because of another woman’s jealousy? Can’t the kid just be happy for once?

I’ve loved this show from the get-go and it’s the only show I watch on TV, but there comes a time when we have to say goodbye. One more GIF for the road: 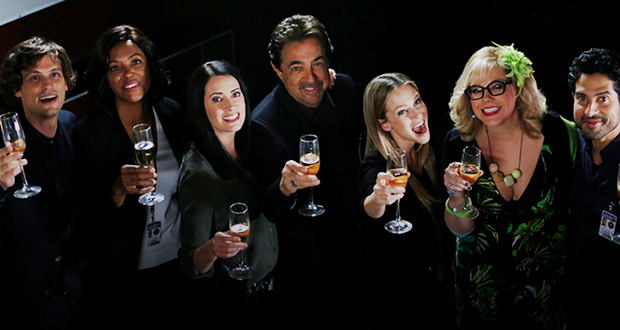