PART 2: The Making of mankind and the Sabbath

Before we begin, I must apologize for the delay in posting the Bible study. I am not about to make excuses because of the schedule I keep lately or the latest bout of anemia attack, if I want this to continue, I must make time.

The last time we looked at Abel and Cain and an awesome genealogy! I guessed people from that time lived longer because there was no outbreak of diseases, famine, and rampant crime. Also, they grew and attended their crops without the interference of chemicals.

Today, we’re going to look at wickedness in the world, the building of the ark, and the great flood.

Corruption of the human race and building of the Ark

Many of us know the story of the flood, but we tend to overlook the prequel (6:1-4). The sons of God (understood as fallen angels, but this is up for debate and it’s going to take another post to dive into this) saw how pretty the fair maidens were, married them, and they gave birth to the Nephilim race. When God saw the wickedness of His creation, it grieved Him that He made the human race (6:6). He set about to destroy the earth and all the wickedness thereof (6:7), but Noah’s righteousness made Him rethink the decision although the earth was corrupt and filled with violence (6:11).

God instructs Noah to build an ark which is just a really big boat. We can safely say that this was the first boat ever constructed, yes? Some of us don’t pay attention to the measurements, but it is also important. So the ark’s dimension was 300 cubits (138 meters) long, 50 cubits (23 meters) wide, and 30 cubits (13.8 meters) high (6:15). Then there was an 18-inch opening of 1 cubit (46 centimeters) below the roof encircling the boat providing light and air (6:16). Noah would then build a door in which God would close. Do you know what this means? God was the Captain of this sailless boat.

Now pay attention for in 6:18, God makes a covenant with Noah, the first of several covenants between God and man. God gave Noah specific instructions on who/what was to enter the ark: Noah, his wife, his three sons, their wives (that’s 8 people) and a male and female of every creature and of course, food. (6:18-21). So Noah enters the ark and here is where confusion sets in for some readers where it concerns the animals. As we saw earlier in 6:19-20, God told Noah to bring in the animals by two, however in 7:2-3, He said 7. But pay attention for the keyword is clean: Seven pairs of each kind of clean animals were taken and one pair of the other animals. By clean, it means that those animals were acceptable for sacrifice after the flood. Hence the reason Noah had to take 7 of every clean beast.

With Noah, his family, and the animals safe inside the ark, it begins to rain after 7 days (7:10) for 40 days and 40 nights (7:12). The flood covered the entire earth for 150 days thus cleansing it for everything is submerged including mountains and every creature and living being dies (7:17-24).

Just imagine Noah building the ark and people around him carrying on and ridiculing him instead of checking their heart and then maybe they too, would’ve been saved.

^ Nephilim means fallen ones or giants.

^ Although Noah found grace in the eyes of His Maker for he walked in close fellowship with God and was righteous, it doesn’t mean that he was without sin (Romans 5:12-14).

^ The Bible doesn’t specifically say how long it took Noah to build the ark. When we first come across Noah in 5:32, he is 500 years old and when he enters the ark he is 600 years old. It doesn’t necessarily mean that he took 100 years to build the ark for it may depend on how much time passed when God told him to build it (6:14) to when he entered it (7:1).

^ The number 40 is very significant in the Bible. It is often associated with trial, punishment, testing or even affliction. Jesus fasted for 40 days and 40 nights (as it rained on the earth), the Israelites ate manna for 40 years, after His resurrection Christ appeared to the apostles for 40 days before He was taken up to Heaven, the Lord delivered the evil Israelites into the hands of the Philistines for 40 years, it took Elijah 40 days and 40 nights to reach Horeb etc.

* padfield.com for the measurement of the ark. 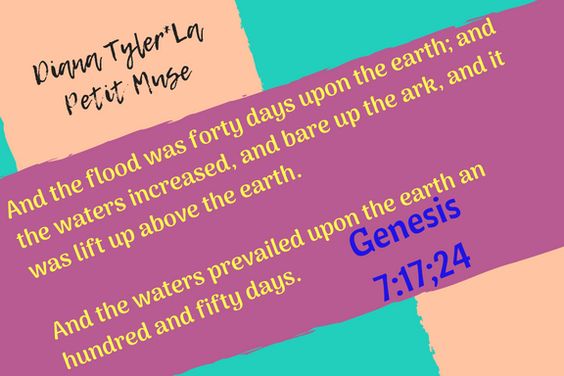 40 thoughts on “Genesis part V: The wickedness of the world and the great flood”