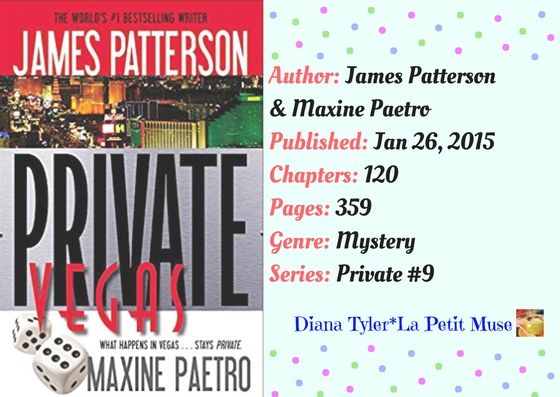 Las Vegas is a city of contradictions: seedy and glamorous, secretive and wild, Vegas attracts people of all kinds–especially those with a secret to hide, or a life to leave behind. It’s the perfect location for Lester Olsen’s lucrative business. He gets to treat gorgeous, young women to five-star restaurants, splashy shows, and limo rides–and then he teaches them how to kill.

Private Jack Morgan spends most of his time in Los Angeles, where his top investigation firm has its headquarters. But a hunt for two criminals leads him to the city of sin–and to a murder ring that is more seductively threatening than anything he’s witnessed before. Private Vegas brings James Patterson’s Private series to a sensational new level.

I dislike this story. I dislike Justine and I still dislike Jack Morgan. Justine was used as a prop. She did nothing for me. Gozan and Khezir were replicas of JP’s earlier nasty creatures – the vampire brothers in Violets Are Blue. I also dislike when Khezir suddenly became Khezzy out of the blue. Jack Morgan is an extremely boring individual and I wished he had died in one of those car bombings.

This book was terrible and JP needs to stop putting his name on books he doesn’t care to write anymore. Disjointed, jumpy plots, no proper story. Probably the worst book I’ve read in a long while. I’m glad I did not spend money on this trash. Even the title is misleading. It’s about time JP and co. close down Private. It just isn’t working.

LORI KIMBALL HAD three rules for the death race home.