I know I said that I’ll try my utmost best to break out of it, but now and again, I still find myself procrastinating and it ain’t nice.

STORY: The rivalry between two gangs, the poor Greasers, and the rich Socs, only heats up when one gang member kills a member of the other. 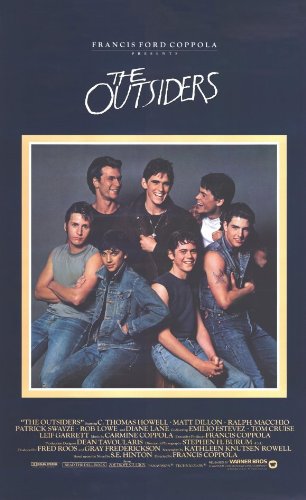 Only number 3? This is what happens when you’re doing a challenge for *counts on fingers & shrugs* about 8 months. At the time I took on this challenge it was due to the fact that I had not seen all of Tom of Cruise’s films and I was excited to do it and get it over with, but I change all the time and I’ve lost interest in movies over those months. Also, I dislike 80s movies. Anyway, this review is most likely going to be short.

I had a choice to watch the movie or read the book. I chose the movie – a no-brainer why – and I won’t be reading the book despite the fact that many readers say that it’s a treasure. The movie almost put me to sleep. Yep, that’s right. I almost did not pay any attention to the film so I don’t know who was who in The Greasers except that TC was Steve Randle, a secondary character.

He yelled a lot whenever he got screen time, but I wonder, what’s so special about this move other than Cruise eating chocolate cake? That’s the only thing I took away. Steve eating cake and making a mess out of it. 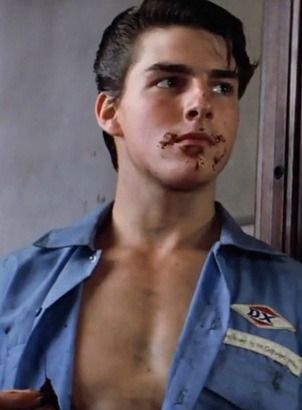 You cannot handle the Randle!

Steve likes chocolate cake for breakfast too. There’s this particular scene near the end (I think) when Steve and another boy walks into their friend’s house to share the good news of three of the so-call delinquent being heroes.

That wore off fast when Steve saw the chocolate cake:

Might as well be talking to the cake (although he was addressing Rob Lowe’s character), but isn’t it ironic that he’s standing in front of the ‘universe’ when he says this? The cake is his universe. 🤣

There could be a killer cockroach (or a killer clown) on the loose and while everyone around him is panicking, Steve stops the world to eat cake without a care:

He yells how great chocolate cake is to the world and how it satisfies even the best of hangriness (hunger+anger) and how he’ll most likely become an ambassador for chocolate cake.

Well, not really, but that would’ve been funny if he did.

And when he’s not having a love affair with the chocolate cake, he’s doing backflips off car hoods. Seems like the boy was already practicing for his future role as stuntman/Ethan Hunt.

So that’s basically what I took away from the movie. I remember Tom looking back and talking about this specific role a sometime ago while promoting a Mission film (I could be wrong, but I don’t have to be right) and if my memory recalls the interview, he said he had to do the chocolate cake scene a few times and he actually ate too much chocolate cake that day, not that he was complaining, for he was in for the cake from the beginning.

If there were tears in my eyes they were from relief knowing that the movie was finally over for I couldn’t feel sympathy for any of the characters. Oh, wait, there’s one more thing! The Sheriff guy looked a lot like Michael Jackson in “Ghost” so I’m guessing MJ watched this film and based his appearance somewhat on him.

MJ as the Mayor

Joking! But they do look alike.

And the rumble was a waste of space, but can we take a moment to appreciate TC’s face here?:

How in the loving name of Hollywood, does his hair stay so perfectly well greased during a fight? Don’t bother, I think the rain was falling during the rumble. See! I told you I was not paying attention to this movie!

If some of you have watched this movie and think that I am neglecting to comment on TC’s teeth, sue me. In order to make the fight scene more realistic, this committed idiot had a cap in his tooth removed so one can see how much damage was done to him.

I might have insulted an iconic movie, but eh, I don’t care, I only watched for Tom anyway when I could’ve saved my time and just watched this video had I known it existed!:

^ During filming, Tom Cruise had gotten his script for Risky Business (1983).

^ Tom Cruise auditioned for the roles of Sodapop Curtis, Darrel Curtis, Randy Anderson and Dally Winston before being cast as Steve Randle.

^ In the scene where Dally threatens the nurse in the hospital with Two-Bit’s knife, the nurse is played by S.E. Hinton, author of “The Outsiders” novel. She wrote the original story when she was 15 years old, and finished it when she was 16.

^ Out of the main cast, all the kids were in their late teens, with the exceptions being Patrick Swayze, who was 29 years old, and Ralph Macchio, who was 22 years old.

^ Writer of the original novel S.E. Hinton was a part of every aspect of filming. She has stated in several interviews how much she loved the boys that were cast to make up her gang of greasers. Since almost all of them were teenagers and away from home with no adult supervision, she claims that she became a mother figure for them on and offset, and fondly remembers them calling her “Mom.”

^ Tom Cruise and Patrick Swayze did their own gymnastics stunts in the scene leading up to the rumble.

^ Emilio Estevez and Tom Cruise were childhood friends before the film and showed up to the audition together. Both received starring roles.

Would I watch again: Even if you give me chocolate cake, I am not going to sit down and watch this movie from beginning to end.

Steve Randall saying, “What’s it like being a hero, huh?” I bet Tom Cruise hasn’t asked that question to anyone since. 😉

***All GIFs and photos via Google Search

Losin’ It… so not looking forward to another rubbish 80’s movie. I know it’s rubbish just by the title alone. Losing it. He sure lost his marbles over the years. 🙄