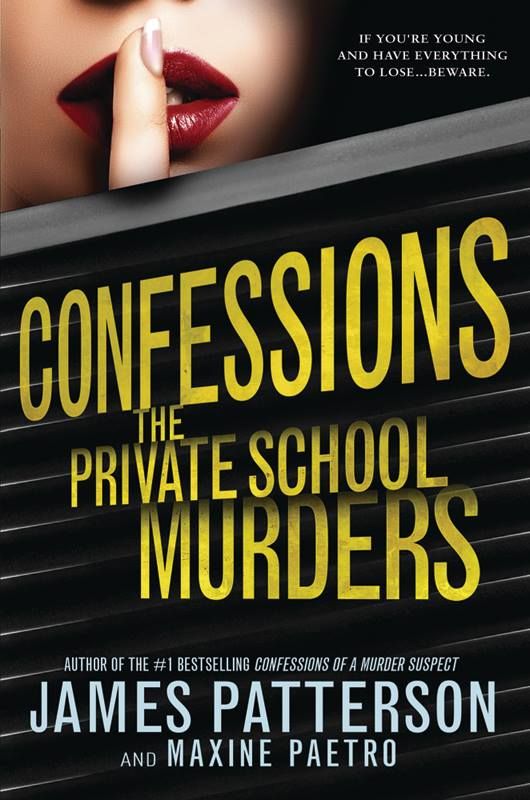 In the sequel to the #1 New York Times bestseller Confessions of a Murder Suspect, James Patterson keeps the confessions coming breathlessly as Tandy Angel delves deeper into her own tumultuous history-and proves that she can rise above the sordid Angel legacy.

Wealthy young women are being murdered on Manhattan’s exclusive Upper West Side, and the police aren’t looking for answers in the right places. Enter Tandy Angel. The first case she cracked was the mystery of her parents’ deaths. Now, while she’s working to exonerate her brother of his glamorous girlfriend’s homicide, she’s driven to get involved in the West Side murder spree.

One of the recent victims was a student at Tandy’s own elite school. She has a hunch it may be the work of a serial killer, but the NYPD isn’t listening to her…and Tandy can’t ignore the disturbing fact that she perfectly fits the profile of the killer’s targets. Can she untangle the mysteries in time? Or will she be the next victim?

I devoured this book rather quickly. I have a confession: I still don’t like the series to an extent, but this book was all right.

Tandy is back and she’s tackling three cases:

^ private school girls are being murdered. Why?

In this second book, Tandy also gains back her memory of her first love, James Rampling, who happens to be the son of the Angels’ enemy #1, Royal Rampling (I really like the surname! It’s proper British and the annoying name suits the man quite right).

When Jacob Pearlman was introduced as the kids’ new guardian, it was love at first read.

At one point in the story, Tandy’s friend C.P. kept bugging her about a ‘super-sexy purple-prose page-turner’ that was sweeping the planet by storm. I was actually thinking that the authors were referring to Fifty Shades (heyy, throwing shade eh?) even when C.P. called it awful.

What I didn’t like was the fact that when Tandy started solving the cases, she solved them one right after the other. It was pretty much annoying for it was rushed. The authors neglected to mention why Gary killed those private school girls. Because of this, I had to take away a steaming coffee cup. I also took away the steaming coffee because of the romance. I mean, the girl is 16, yes, I know she’s going to fall in love, but the brainwashing and kidnapping was a little too much and I dislike the fact that they were close to being intimate. Like, calm down! There’s enough time for that later when you’re older.

Although it was better than the first book, I still didn’t enjoy the characters (save Hugo and Jacob).

Oh, and Tandy, don’t call me your friend. We’re not friends.

…Another reason why this gets two steaming coffee cups was the fact that the title was misleading. It was not about private school murders, but more about Tandy looking for James. I started to speed read after the first 20 or so chapters. Very unrealistic.

Now, on to the next book.

Confessions: The Paris Mysteries by James Patterson and Maxine Paetro

Describe what it feels like to hear a beautiful piece of music or see a stunning piece of art.

Experiencing a beautiful piece of music makes me feel soothed and that everything in that moment is serene. Well, I can safely say this about “Carl Le Pianiste” when he plays the piano. I actually wrote a short story about talented musicians in Parisian train terminals because I was inspired by some of them.

As for art, well, there is nothing more breathtaking than the free art which God has given to us that makes me stop, pause, wonder, and to be thankful. Nature is unbeatable art! ❤