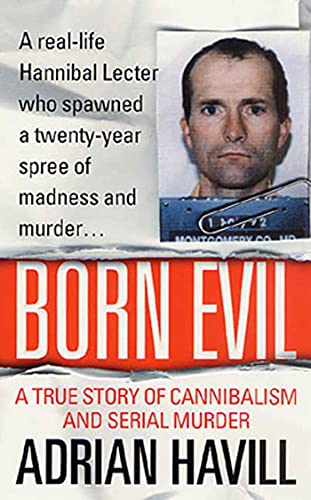 HE HAD NO ENEMIES AND NO FRIENDS.

Homeless and living in his truck, forty-year-old Hadden Clark often drew stares in Bethesda, Maryland. He also slept with a teddy bear, and dressed as a woman, strolling through town, carried carving knives, a straight razor, and a gun in his truck. When the reclusive loner was arrested in 1992 for the stabbing murder of a beautiful young woman, no one was surprised. It was after his incarceration that the surprises came, popping up like half-buried corpses in a heavy rain.

While serving a seventy-year sentence, Hadden confessed to having a split personality, dominated by a psychotic mother and daughter who were vying for attention. He also admitted to murdering at least a dozen more women – the ones he could remember – cannibalizing them, using their leftover body parts as fishing bait, and burying their remains everywhere from a local cemetery to a sand dune on Cape Cod. Authorities didn’t believe him – until Hadden took them on a personal four-state tour.

HE EXISTED FOR ONE REASON ONLY: TO KILL.

Separated by a thick glass wall, and under the most stringent security precautions, author Adrian Havill sat face-to-face with a murderer as he participated in several in-person interviews with Hadden Clark, and learned what made this monster kill again and again…

The very worst kind of killers can come from the very best of families. Mothers and fathers can go bad, despite their illustrious ancestors, and spawn demon seeds that they unknowingly nurture into depraved adults.

The author set out to tell the story of Hadden Clark, but I felt cheated. The author talked at length about Hadden’s childhood and family which was acceptable up to a certain point because you get a feel of where Clark came from, but going into details about family members and other people threw the story off. I read the cover and I thought it was going to be an intense story because of Hadden’s so-call cannibalism, but after reading, I didn’t even get that feeling. So he drank some blood, but it wasn’t even human’s. However, his brother Brad cannibalized his victim and if the author was looking for Hannibal Lector’s brother, then he should have written the book about Brad.

At one point, I thought I was reading fiction. True crimes stories have always fascinated me to the point where I wanted to be a lawyer one time. I still love the law and I keep up with fascinating cases, but it just was not to be.

Hadden was relentlessly teased by his own parents. They called him ‘retard’. He suffered from hemochromatosis and cerebral palsy. It didn’t stop him from attending the prestigious Culinary Institute of America. He was in the Navy. Just when you thought the poor boy could have some sense of normalcy, something disrupts his life.

At one point, the author spends like ten or so pages going back and forth with Hadden and the cops when he was arrested. I understand that the cops needed to do what they did in order to get Hadden to confess to the crimes, but they were crude, nasty and annoying. And what did Hadden say every time they pleaded with him to confess? ‘I want my lawyer’. Any idiot could see he had played them and he played them patiently well. The cops were simply embarrassed that the killer was under their noses for such a long time and one was there with a vendetta for the Dorr murder.

Cannibalism was not mentioned during court proceedings. So did he or did he not, Mr. Adrian Havill?

Yes, the man’s life was tragic and I feel bad about the unloved childhood he had to endure, but it doesn’t excuse what he did. Hadden cannot be rehabilitated at this point in his life, but he should have gotten treatment at a mental facility. He was not born evil, he was damaged because of the mistreatment he endured from his parents and brothers. This life is wicked.

Hadden is currently serving a 30-year sentence and he draws in his spare time.

> “A lot of people close to my mom, well, they only saw the good side. When you don’t live with a person, you don’t see the other side.” Hadden (Page 58)

^ “Why is there evil? It’s not such an easy question to answer. But the fact remains, that we as human beings are imperfect. We hurt and we destroy and all because we are free to do as we please. There is an evil in every one of us, which is exactly why we truly need God. If we were perfect we would be gods ourselves, and life would be irrelevant.” Laura Houghteling (Page 135)

> “A few things I’ve done have been very bad, and maybe if I got the proper care or people hadn’t abused me, I might not have done what I have done.” (Page 230)

^ Salzman was acting as a lawyer should; he was sworn to defend his client to the best of his ability. He knew Hadden was a convicted murderer. He knew of his other crimes. But he wasn’t about to just go through the motions. What he really believed about Hadden would remain his secret. Today he was to be his advocate, and it was his duty to provide him with the strongest defense possible.

It irks me to no end that a lawyer would defend a guilty killer. Guilty killers with STRONG evidence linking/pointing to them shouldn’t get lawyers, but hey, it’s the law.

It’s Poetry Wednesday and I’ll love to share this beautiful poem that was written by my friend, T.R. I hope you enjoy it as much as I did. She’s such a gifted writer!

You sit there all alone

watching the world pass you by.

You sit there sighing.

Hands at your side.

Outside the wind is dancing.

Outside the world goes round.

But inside you are hurting.

Inside you wear a frown.

It’s okay to have these feelings.

But it’s not okay to die.

There is love around you.

Yes, even while you hurt.

There is care to support you.

To show you what you’re worth.

No one sees your value.

Your tears have become rust.

Truth is under pressure

But you and I, we know this,

and have since found our home.

When you’re giddy with excitement, does time speed up? Slow down? Tell us about the experience of anticipation.

Haha! Time never seems to speed up when I’m overly excited and can’t wait to dive into the anticipation!