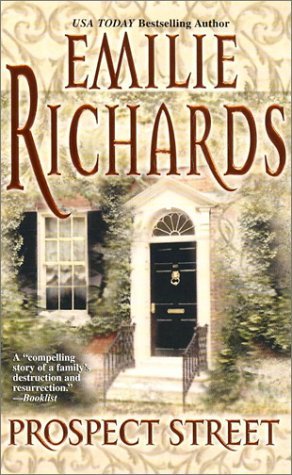 Faith Bronson finds her privileged life shattered when her marriage ends abruptly. Only just beginning to face the lie she has lived, she finds sanctuary with her two children in a run-down row house in exclusive Georgetown.

The historic row house passed down through Faith’s family, harbors dark secrets of its own. Almost forty years ago, Faith’s baby sister disappeared from an upstairs bedroom, and this tragic, unsolved mystery continues to fascinate a nation. Now the secrets of the house on Prospect Street are about to be revealed. As Faith is forced to confront the deceit that has long defined her, she moves closer to freeing those she loves from their torment. For only when the truth is finally told can Faith, her family and the man she loves make a new beginning.

This is going to be a pretty short review.

I love the characters, the plot, and the surrounding. The author took me there! This story gripped me from the opening paragraph. It was well written and I was captivated thoroughly. It is about love and discovery, but most of all, forgiveness.

I’ll definitely recommend this book although it’s from 2003. It’s so rare to come across 5-star stories lately, so this was refreshing.